The first thing everyone who wants to play golf should know probably is what equipment is used in a game of golf, and in this post, we’re looking at what the golf clubs are, so what is golf clubs?

Golf clubs are simply the tools golfers use in striking the golf ball. It is practically impossible to play the game of golf without employing the use of clubs. A golf club is the only tool you are permitted to use in striking a golf ball.

Golf clubs come in different shapes and sizes and are made up of the head, known as the clubhead, the shaft, and the grip.

The club shaft is that long tube that connects the clubhead to the grip. Although equipment manufactures are coming up with different types of shaft, their work remains the same, to help the player to generate enough force ineffectively hit the ball. 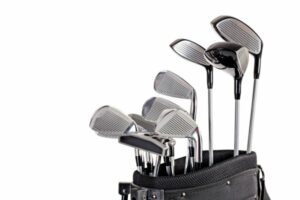 And the grip is the actual place where the hands hold the club.

What The Different Types Of Golf Clubs?

The golf club is actually divided into 6 types. They are :

The golf driver is known as 1-wood because it belongs to the wood categories of the golf clubs.

Drivers can not be mistaken as they are easily the longest club in a player’s bag and also has the largest clubhead.

It is the club that does the job of getting the ball as far as possible, from teeing off, closer to the green.

Other features of the 1-wood or Drivers typically is that it has the least loft, between 9 to 12 degrees.

You understand that loft in golf clubs is basically that angle area of the clubface that controls directions and at the same determines the distance.

As compared to Drivers(1-Wood), fairway woods have a bit stiffer and have a shorter shaft, and also have smaller club heads.

They are also constructed to have more loft than drivers and are used typically for the first stroke on short par-4s or maybe on a long par-3s. Fairway woods can also, in most situations, be used for a second stroke on par 5s, and a long par 4s.

Although the fairway woods can certainly be used of the tee, as often seen by some golfers, the designed of the clubs to have a flattened sole is best suitable for use on the fairway.

It is also important to note that, although the clubs name suggests it’s made from wood, as was the case before when all woods had their heads carved from wood,  it actually rare to find manufacturers who still use wood in designing fairway wood.

Golf irons are designed to have smaller clubheads with a flat, angled face.  Irons as the name suggest, have heads made up pure irons or steels, with shorter shafts when compared to the drivers and fairway woods.

Irons are used in propelling the golf ball towards the hole, mostly when less than 200 yards away from the green.

A less intense angle on a clubface makes it travel farther though at a lower height, and likewise the other way round.

A typer golfers bag contains more Irons than any other clubs.

The architectural design of the hybrid clubheads takes the combination of both irons and woods features, but at the same looks different. Like the name suggest, its an upgrade of borrowed features from both the irons and the fairway woods.

Hybrids are sometimes called Utility clubs or Rescue clubs and are also numbered like irons, eg 2.hybrids, 3-hybrids, and so on.

Incidentally, hybrids are often used as replacement clubs for irons with each number on a hybrid club replacing the same number on an iron club.

Moreover, in modern golfing, most golfers prefer using hybrids than irons for obvious reasons. 2-, and 3- irons are been replaced by 3-hybrids because the two irons clubs are one of the most difficult clubs to hit, as they are less forgiving and offer little loft.

A putter is one club every golfer used, usually to put the ball into the hole from a relatively short distance.

Among all the clubs in a golfers bag, they are the most specialized set and are unique in design, with a somewhat striking face that is low-loft and comes in different shapes and sizes.

Unlike other golf clubs that come with all sorts of technological inputs for game improvements and forgiveness, putters, irrespective of the structure is meant for just one job, to push the ball into the hole.

The choice, therefore, of what putter to use is a matter of personal preference and not influenced by some sorts of offsets or anything of such.

Although putters do have a loft, its just not as much as other golf clubs, maybe 3 or 4 degrees. 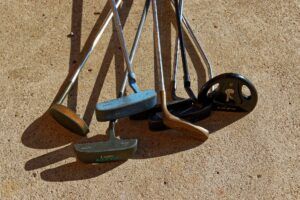 Wedges are known to have the highest loft among all the clubs in a player’s golf bag and are specifically designed for short shots, also for chips and pitches as well as playing out of the bunkers.

Wedges could be regarded as a sub-set of the irons reason been that they have similar clubheads, with the only difference in club structure been that, wedges are more sharply angled for loft, and that Explained the reason why wedges have more loft than any other golf clubs.

Having said that, it is important to note that, there are about 4 types of wedges, namely:

These have the least amount of loft, typically from 44 degrees to 55 degrees of loft, and generally, most golfers find it very easy to get the pitching wedge under the ball and with the loft of low degree, it sends the ball traveling as far as between 110 yards and 140 yards.

The sand wedge has a loft slightly higher than the gap wedge, between 54 degrees and 58 degrees.

With an open face, the sand wedge as the name implies is primarily designed for getting the golf ball out of the sand or bunkers.

The sand wedge can still be used for short shots around the green or even a full swing shots off the tuff.

Among all the types of wedges, the lob wedge is the one with the most loft, of a range between 60 degrees and 65 degrees, and with that, taking a shot with the lob wedge will send the ball really high and quickly, and landing about 70 yards.

Lob wedges are mostly used when a golfer wants to hit a short shot around the green.

Lob wedges would also come in handy when you want to get the ball so high in the air quickly.

What does a set of golf clubs consist of?

In modern Golf, a typical set of clubs consists of about 12 clubs and may typically include, 1-wood(Driver), 3-wood and 5-wood, irons 3-9 sets, and a pitching wedge, a putter.

Now, the USGA has a rule in place indicating how many clubs players are allowed to carry at a given time

Rule 4 in the fundamentals of the game states very clearly that players are allowed to carry a maximum of 14 clubs in their bags at a given round.

Here is a direct quote from the official website of USGA

Purpose of Rule: Rule 4 covers the equipment that players may use during a round. Based on the principle that golf is a challenging game in which success should depend on the player’s judgment, skills and abilities, the player:

So, there you have it.

14 is the limit players are allowed to have but you can carry less, well most players carry 12 clubs in their bags.

Now, there is also a penalty if you are found to carry more than 14 clubs in your bag at a given round, up to a maximum of 4 penalty strokes.

What that means is that you are assessed 2 penalty strokes on each hole where the breach occurred.

On the Side Note: 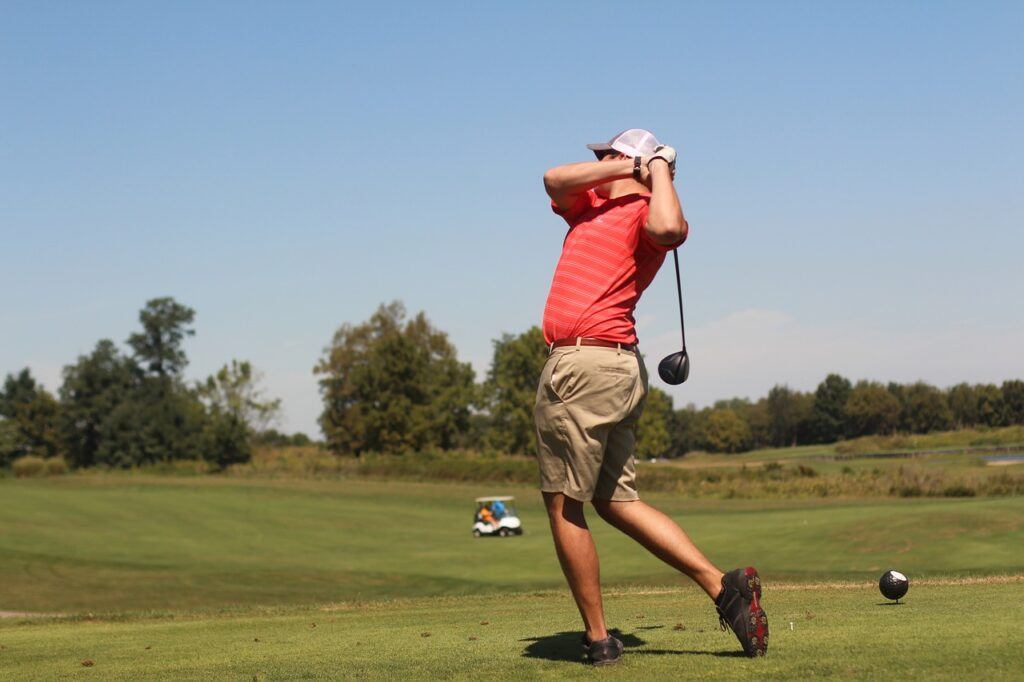 So, in golf what is a handicap, and how exactly is it calculated? Well, if you are new to golf and you ever heard of… 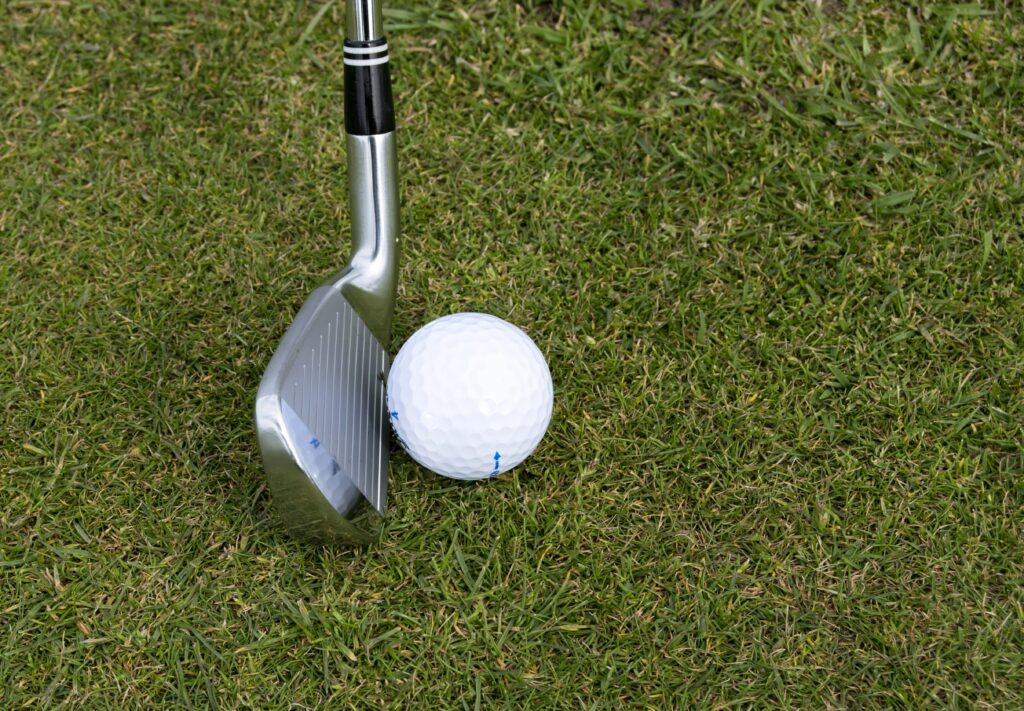 Now, if you are in the golfing world, you obviously must have heard the term offset thrown around so many times. The main question is,… 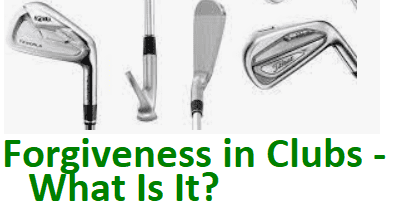 When I got started in golf, one of the most confusing words or terms I heard people mentioned always when discussing golf clubs was the…