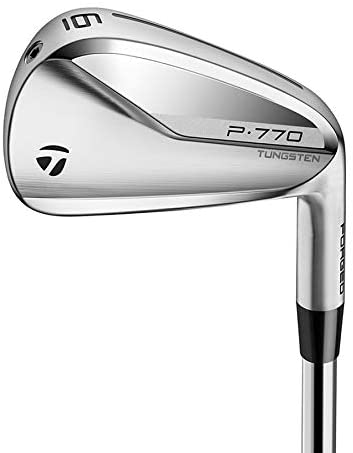 In this review, we’ll be looking at the P770 Irons from Taylormade in order to help you determine if the P770 Irons is right for you and if might help you play better golf.

We’ll quickly run over the technology infused into the P770, the performance, forgiveness, Speeds, and distance.

After that, we’ll be looking at some reactions and feedback from people playing the P770 irons.

So, if you are thinking of getting the P770 Irons from Taylormade, then you might want to read this entire review to see if they are a good fit for your game.

The P770 Irons can be categorized under the better players or performance irons, meaning they are designed for highly skilled players with zero to a single-digit handicap.

They can also be played by mid-handicap players as they offer forgiveness.

The Irons are quite impressive and are a perfect fit for players looking for more ball speeds and Distance in a performance Iron.

These Irons combine distance and forgiveness in a compact head, and that explains why many double-digit players have them in their bags as well, even though by design, they are meant for skill players who have no problems with their swings and strikes.

A lot of technology has gone into making the P770 irons such an incredible Irons, and you know Taylormade has been in the game for quite some time and was one of the pioneers of technology in golf.

The table below shows the full specification from the 3 iron down to the PW & AW.

The P770 Irons have been rated “the best-looking irons ever” and I think I agree with those holding this position going by how stylish and Classic they look in the bag.

The P770 Irons actually look like the P790 in a smaller head that consists of a thin, wrap-around forged 4140 face, a soft carbon steel body, and up to 46g of tungsten weighting infused in the clubhead for more distance and forgiveness.

Talking about performance, as Compact players Distance Irons, the p770 irons have put up a solid performance on all fronts, from Distance to Forgiveness, an incredible speed and impressive sound aided by the new speeds foam technology, although not as much positive for workability.

Although The P770 Irons might not be as forgiving as the P790 due to the smaller size, it sure delivers forgiveness enough to help retain speeds and distance across the face even on mishit, and that is all thanks to the Technological input like the Progressive Inverted Cone, and then Thru-Slot Speed Pocket.

The infusion of Ultra-light urethane foam in the head pushes the design limits of face speed while simultaneously improving feel.

The P770 Irons delivers amazing distance thanks to the infusion of the 46g of tungsten weighting technology designed to deliver more speeds and distance.

Also, the combination of a Thru-Slot Speed Pocket and Progressive ICT ensures even distribution of the ball speeds across the face.

What others are saying about the P770 irons.

We went to town to feel the pulse of players using the P770 irons in a bit to get what they feel about the TaylorMade P770 irons and we got tons of reactions and feedback.

One of the things most people love about the P770 irons, according to the review and feedback is the look and feel.

People are literally crazy about the look of the p770 irons that, one golfer said he won’t mind having a pair in his bag if it were possible.

By and large, the P770 iron has gotten a 5-star rating on almost all major online shops selling golf equipment.

So, as I said at the start of this post, the P770 irons are designed to accommodate players who have skills and low handicappers.

There are a number of places you can potentially get your P770 irons including visiting a physical golf shop nearby. If you decide to visit a physical store, make sure you test out the Irons and be sure everything is great before pulling out your card.

Another place is to visit the Taylormade online store. But for convenient purposes, my best-recommended place is on Amazon.com.

Conclusively, the p770 irons are slimmer and have an amazing look and feel.

They are forgiving and are a complete package and would make a great pick for the player that wants more speed and distance and forgiveness in a players’ iron.

So, if forgiveness, Speeds, and distance plus great look fit into what you want in iron, then you have the Taylormade P770 Irons as a viable option.

If you have played the P770 Irons from Taylormade, kindly drop your comment here for my audience, and we’ll be glad you did.